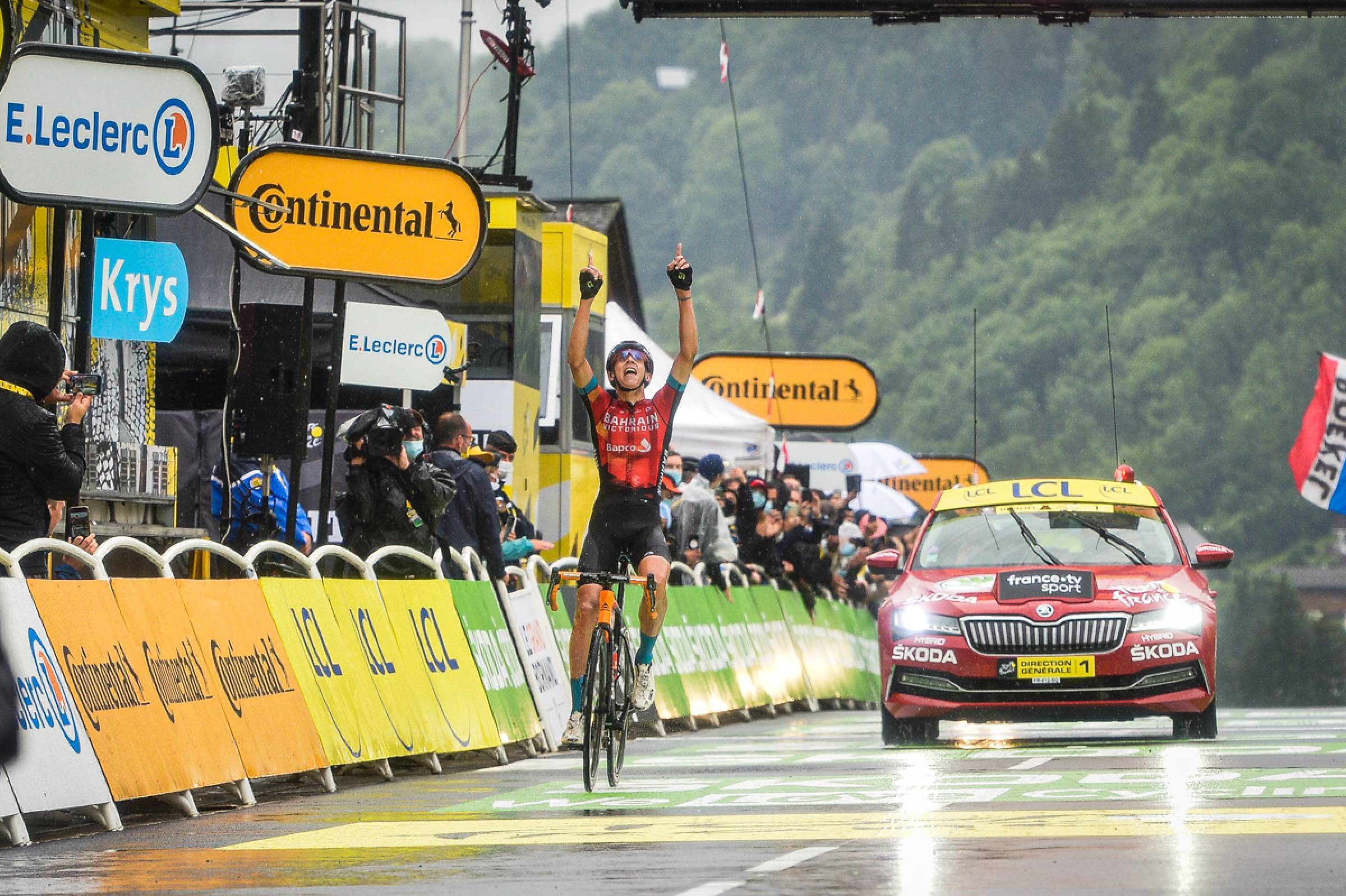 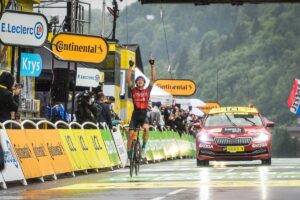 Bahrain Victorious Team’s Dylan Teuns won the stage into Le Grand Bornand, after stealing away from race leaders on the last climb up the Col de La Colombière. He held his rivals Tadej Pogacar, Michael Woods, and Ion Izaguirre back on the descent into the finish.

But it was twenty-two year old Tadej Pogacar’s aggressive climb up La Colombière that stole the yellow jersey, as he took time away from Van der Poel, who was over 17 minutes behind the leaders in the final kilometers. Now as leader of the Tour he will have the rest of the stages to defend his jersey. He also holds the Best Young Rider white jersey.

“I’ve had a difficult year…finally I can celebrate,” said Teuns after the finish. He said it wasn’t easy to chase and pass Michael Woods. The 29-year-old also won stage 6 up the Planche des Belles Filles in the 2019 Tour. He told camera crews with a broken voice that his grandfather died only a week ago, and that is who he thought about in the last 10 kilometers.

“At the start it was a super hard day,” said Pogacar. “But I felt good in this weather, but I said to my teammates [about three mountain passes to go] I am going to try and break the race. I suspected after yesterday…they thought they could break us as a team..but in the end they were affected by yesterday and today’s cold and rain.”

UAE Team Emirates’ Pogacar who started the day in fifth, climbed his way to the stage victory, with his decisive moves made up the Col de La Colombière.

He pedaled swiftly up behind Woods and Teuns, with Teuns cresting the top on his own, 35 seconds ahead of Pogacar. Pogacar closed in on Woods who had sustained a lead over two mountain passes.

Izaguirre was close behind Woods on the top of the col, but with 7 km to go, Izaguirre and Woods had pulled by Pogacar.

A group of riders, including Yellow Jersey holder Van der Poel, and Mark Cavendish, Green Jersey, and M. Mohoric, Polka Dot jersey, who trailed the leaders by more than 16 minutes would be able to stay in the Tour, but would lose all their points in order to stay in the Tour.

As they came into Le Grand Bornand, with 1.2 km to go, Teuns had 50 seconds over his pursuers, Pogacar, Woods and Izaguirre.  Pogazar was riding as the virtual Yellow Jersey leader now.

Primoz Roglic and Geraint Thomas were last to come across the line, surrounded by some of the biggest names in the Tour losing over half an hour to the leaders. Julian Alaphillipe is also more than 18 minutes behind the yellow jersey leader.

Sepp Kuss teammate of Roglic who is one of the few Americans in the Tour this year and who is now 50th in the rankings, said he was riding as best he could to support his teammate.

Brutal climbs are on offer for tomorrow’s stage 9 from Cluses to Tigne, with two category 1 climbs, two category 2 climbs, and a out of category climb. Last year the stage was cancelled due to snow, sleet and freezing rain. With the GC blown apart today, tomorrow will be a day of attacks.