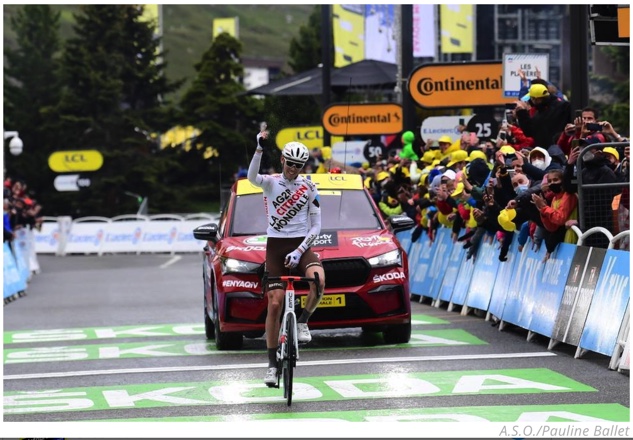 An Australian on a French team Ben O’Connor won the mountainous stage into Tignes today. It was the first year the 25-year old O’Connor is riding the Tour de France for AGR2-Citroen. Throughout the last cols O’Connor made a good effort to take the yellow jersey, but the advantage at the end against Tadej Pogacar was off by a few seconds.

“To be here in the first place is a dream, but to do this…” said O’Connor after the race. “It’s mind-blowing. I’m loving every moment.” He admitted he wasn’t meant to be in the break, and he “didn’t really know what to do,” but after seeing they had 4 minutes over the peloton, he decided to take the chance.

O’Connor’s contract with the French AGR2 team was extended earlier this year, and we bet they are glad they did.

Despite riding the last two cols hovering around 8 minutes back, Pogacar was not to let his 8 min and 13 second yellow jersey advantage go. On the final km up to Tignes, he pulled away from the peloton gruppo and moved swiftly up the final kilometers to gain ever more time against his rivals for the yellow jersey, and arriving 6th across the finish line.

It was a cold day in the Alps with temperatures hovering between 42 ad 53 degrees, with rain to add to the misery for riders.  There were five mountain peaks facing the racers today, two category two climbs, one out of category and two cat. 1 climbs among them the finish in Tignes.

Ben O’Connor slipped into the virtual lead by 60 seconds about 25 km before the finish. Could he keep it? A trio of Nairo Quintana, S Higuita, and O’Connor that held over two summits, was now down to two, with Quintana slipping behind by 23 seconds. Quintana seemed to be affected by the intense cold.

The peloton with yellow jersey holder Tadej Pogacar, was a little over 8 minutes behind them. They began to speed up and brought Pogacar back into the virtual lead.

The final climb was about 7,000 feet above sea level, and the col itself is the 8th highest in the Tour de France.

17 km to the finish, O’Connor attacked and left Higuita. He now had a little over a minute to make up to become the virtual Tour leader. A little under 7 minutes behind, Pogacar and his UAE Team Emirates kept up the pressure on the peloton gruppo, they weren’t going to let the yellow jersey get away. It was a good strategy to tie up the yellow for the two days in the punishing mountains leading up to the rest day tomorrow, July 5. In that group was Van Aert, Uran, Vingegard, Carapaz, Tuens, Yates, Alaphillipe, Porte and others.

A group of sprinters including Cavendish, were 25 minutes behind.

With 9.5 Km (about 5 miles plus) to go to the finish, there was a 27 second gap between O’Connor and Pogacar for the yellow. Meanwhile Quintana got back his legs, and passed Higuita on the road up the final col. Now he was in second place, and in a good position to pick up polka dot points. Up front, the maillot jaune kept slipping back and forth between O’Connor and Pogacar, with O’Connor needing to exceed Pogacar’s 8 minutes and 13 seconds advantage, and literally 3 seconds ahead of that.

Five km to the top, Mattia Cattaneo came up and passed Higuita, and was aiming for Quintana. He passed Quintana and continued to cross the line second overall.

Geraint Thomas drove the pace for the Ineos team, to keep Pogacar in the lead. Pogacar became fed up with the pace, and took off on his own to come in sixth overall.