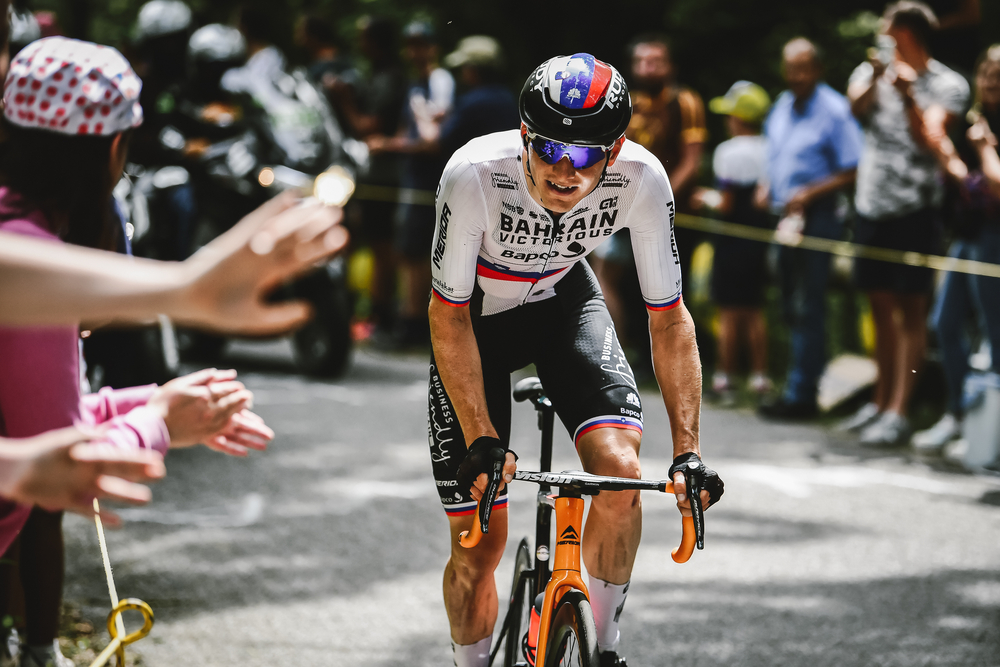 Slovenian Matej Mohoric claimed his first stage win of the Tour de France at Le Creusot.
Tadej Pogacar saved his day after being put in difficulty early in the race by a big breakaway group comprising Mathieu van der Poel who defended his yellow jersey. Primoz Roglic lost contact with the top riders. This is Matej Mohoric’s third grand tour win, having also won in Cuenca at La Vuelta 2017 and Gualdo Tadino at the 2018 Giro d’Italia.

177 riders started stage 7 in Vierzon at 11.13. Victor Campenaerts (Qhubeka-Nexthash) was the first on the offensive right after the flag off. The first half and hour was contested at 55km/h despite a slight head wind as attacks kept going on.

Mohoric and Van Moer away with 88 km to go

UAE Team Emirates took the lead of the peloton. Only TotalEnergies among the other four teams who weren’t represented in the breakaway put one rider (Jérémy Cabot) in the chase but the deficit kept growing. Mohoric and Van Moer sped up in the first climb of the day, the côte de Château-Chinon (km 161.5) where the peloton was timed with a deficit of 6’50’’ [maximum time gap: 7’30’’ at the 50 km to go mark]. The duo forged on and got reinforced by Stuyven and Campenaerts with 46 km to go. The yellow jersey group was reduced to ten riders in the côte de la Libération whereas Campenaerts let Mohoric, Van Moer and Stuyven go. Bonnamour rode in between but was brought back 23km before the end.

Mohoric rode away on the way solo to Signal d’Uchon 19km before the end. Only Stuyven managed to not get caught by the yellow jersey group that arrived reduced at Le Creusot. Carapaz had attacked from the main peloton in the hardest climb of the day, looking at making it up for the time lost to Tadej Pogacar in the time trial but he was swallowed on the finishing line.

Primoz Roglic suffered from his crash early in the Tour and lost more time (3’30’’) in this very demanding stage that is set to affect the riders on the eve of the Alpine weekend.