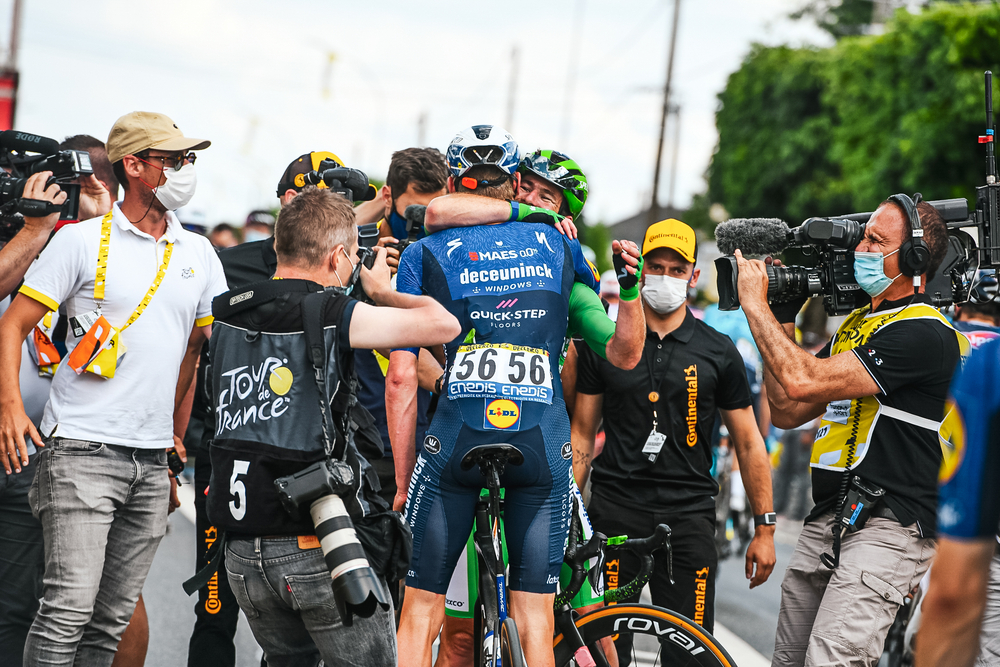 Mark Cavendish continued his sprinter’s winning streak today in the sprint into Châteauroux. It marks his

third time after 2008 and 2011 here, this time beating Jasper Philipsen and Nacer Bouhanni on the line as he did in Fougères on stage 4. Another notch in his belt with his 32nd stage win at the Tour de France. Revenge is sweet, and he’s brushing up close to Eddy Merckx’ record of 34 TDF stage wins. Now there is no doubt that his goal in this Tour –is to meet or break that record. Mathieu van der Poel retained the Maillot Jaune.

The final 100 meters were straight but tricky. After taking a lead out from his teammate, Cavendish jumped on the wheels of Philipsen and Merlier to overtake them in the last 100 meters.

Sprinters’ teams Groupama-FDJ, Arkea-Samsic and Qhubeka-Nexthash pulled out to bring the breakaway back but Van Avermaet went out ahead alone at km 31. Roger Kluge (Lotto-Soudal) came across at km 41. Their advantage was 2’15’’ , the maximum gap for the day. The duo rode ahead for 50 km in the first hour of racing, but behind them Alpecin-Fenix team followed by Deceuninck-Quick Step kept up the pace and didn’t allow the gap to expand. Greg Van Avermaet won the only King of the Mountain prize of the day at St-Aignan (km 72) and the intermediate sprint at Luçay-le-Mâle (km 104) where the peloton was just thirty seconds behind.

Van Avermaet and Kluge got reeled in 2.5 km before the finish. Julian Alaphilippe controlled the peloton to line up Cavendish, while the Man from Manx positioned himself behind Philipsen and Merlier to overtake them in the last 100 meters. With 32 stage wins in the Tour de France, the Cav’ is only two successes shy on Eddy Merckx’ record.

Let’s note this–the fact that World Champion Julian Alaphilippe led out 36-year-old Cavendish is a sure indication of the distinct strategy now being played by their team, Deceuninck-Quick Step. Win in the flats, win in the Alps, and maybe win in Paris?