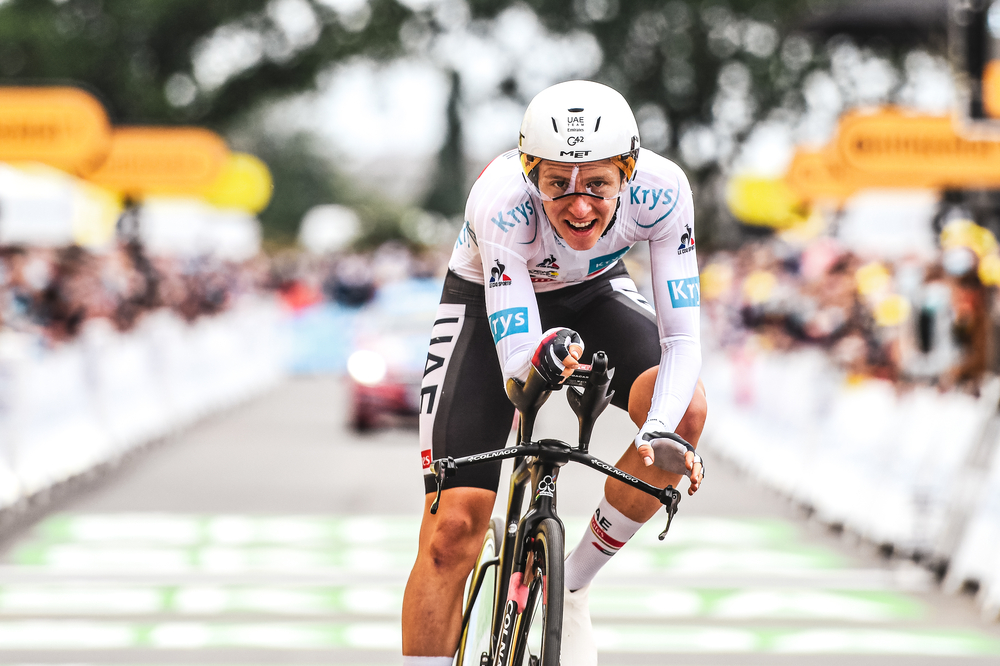 Slovenian Tadej Pogačar nailed the 27.2 km individual time trial from Changé to Laval on Wednesday, a confirming his status as the favorite to win the Tour de France. In last year’s Tour, he clinched his Yellow Jersey on La Planche des Belles Filles.

Mathieu van der Poel held the yellow jersey by just eight seconds over Pogačar. Swiss rider Stefan Küng, the European time trial champion finished 19 seconds behind the UAE Team Emirates leader, who blasted through the course at an average speed of over 50 km/h.

Dane Jonas Vingegaard (Jumbo–Visma) came in third ahead of his leaders Wout van Aert in fourth and Primož Roglič in seventh, whereas other favorites such as Julian Alaphilippe, who was fourteenth at 1′11″, and Geraint Thomas, sixteenth at 1′18″, were left reeling after the first major test of the Tour.

The start of the time trial, held under ominous rainclouds, brought to the line riders injured in the previous stages. Tony Martin, who has won the world time trial championship four times, had a decent time of 35′33″, while four-time Tour winner Chris Froome struggled to post a time of 36′20″, just ahead of Marc Hirschi at 36′28″. Young Dane Mikkel Bjerg, a three-time U23 time trial world champion, made the strongest impression among the early starters and moved into the hot seat with a time of 33′01″.

Then Came the Rain

At this point in the time trial, it started to pour, boosting the prospects of the provisional leader and preventing his rivals from going all out. Brandon McNulty (UAE Team Emirates) crashed and was forced to jump onto a new bike with bloodied knees.

Swiss rider Stefan Bissegger, who claimed a somewhat shorter time trial in Paris–Nice last spring, came close to the Dane but, unable to take serious risks, came up 22 seconds short. Another Dane, Magnus Cort Nielsen (EF Education–Nippo), scored a near-miss, six seconds down, as the roads slowly dried up, buoying the hopes of the favourites.

Mattia Cattaneo (Deceuninck–Quick-Step) bumped Bjerg from the hot seat by six seconds. However, the Italian’s hopes were short-lived: one of the big favorites, Stefan Küng, vaulted over Cattaneo by 36 seconds and took over the lead with a time of 32′19″. At an average speed of over 50 km/h, it seemed enough to grab the stage win unless one of the overall favorites still had an ace up his sleeve. Two other Danes, Jonas Vingegaard and Kasper Asgreen, came out with all guns blazing, in sharp contrast to Primož Roglič’s metronomic effort.

Meanwhile, Geraint Thomas, still suffering from a dislocated shoulder, was already conceding 25 seconds at the first intermediate time check (km 8.8). Vingegaard finished the stage 8 seconds down, with Asgreen at 18 seconds down and Roglič 25 seconds behind the leader, whose time seemed almost unassailable. Almost: Tadej Pogačar clocked one best intermediate time after another (leading by 10 seconds at km 8.8 and 17 at km 17) and blitzed the time trial. The Slovenian is 22 seconds clear of Wout van Aert and 40 seconds ahead of Julian Alaphilippe on Wednesday evening, with other favorites such as Rigoberto Urán and Richard Carapaz already over a minute down.