Tadej Pogačar won his first Tour de France stage out of a five-man breakaway. Marc Hirschi who soloed 90 km before the end got caught within 2 km to go.

Pogačar is the second Slovenian to win in Laruns in just as many finishes in the Pyrenean town, two years after Primož Roglič, who today moved into the overall lead of the Tour de France for the first time in his career.

Pogačar is the youngest Stage winner on the roads of @LeTour in the 21st century. Posting on Twitter he said, “Incredible day, words can’t describe that feeling – victory on TDF st9, thank you everyone involved in this, especially to my love @urskazigart (congrats to her as well at Ardeche ) and to all

After a Fast Start, Aru is Out

168 riders took the start of stage 9 in Pau where a tribute was paid to former Team Sky/Ineos sport director Nicolas Portal.

Marc Hirschi (Sunweb) launched a first attack right after Benoît Cosnefroy (AG2R-La Mondiale) took one KOM point atop the côte d’Artiguelouve (km 9.5). All the way to the bottom of col d’Hourcère, skirmishes took place but no breakaway formed while Fabio Aru (UAE Team Emirates) was dropped and rode alone before eventually calling it a race. Thibaut Pinot started the fight at the approach of the first cat. 1 climb but that was for his teammates to try and win the stage.

Marc Hirschi Out Solo 90 Km Before Finish
Hirschi managed to get out of the front part of the peloton with 90 km to go. A group was formed behind him in the ascent to col

Hirschi Caught with 2 km to Go
With 45km to go, a big group was reunited as all the chasers got reeled in but Hirschi was still 4’30’’ ahead. He kept an advantage of 3’35’’ at the bottom of the cat. 1 col de Marie-Blanque with 25 km to go. Van Aert took another minute from his lead before giving way to Sepp Kuss.

Then Tadej Pogacar (UAE Team Emirates) attacked with less than 3 km remaining in the climb. He didn’t make a difference but Adam Yates couldn’t hold the pace. The next rider to speed up was Egan Bernal (Ineos), followed by Roglic, Porte, Landa and Pogacar.

Hirschi crested col de Marie-Blanque with 15’’ lead over Roglic and Pogacar who took 5’’ and 2’’ bonus respectively. Hirschi rode very well in the downhill. His advantage moved up to 25’’ but the flat section at the end was harder for him. Roglic, Landa, Bernal and Pogacar caught him just after the 2km to go mark.

Hirschi launched the sprint but Pogacar and Roglic passed him to cross the line in that order. It makes another 1-2 for Slovenia after stage 3 as they finished in the opposite order in Orcières-Merlette. Roglic takes over from Yates in the overall ranking. 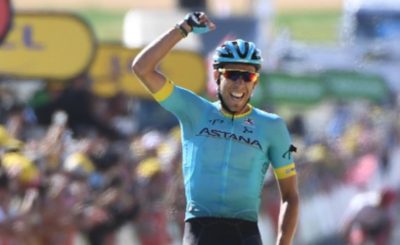 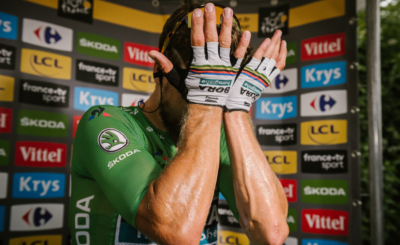