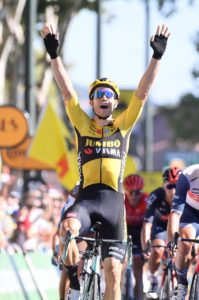 Wout Van Aert took the final sprint into Lavaur after a hotly contested stage that split the peloton into four pieces. Behind him was Edvard Boasson Hagen in second and Bryan Coquard.

Although he was expected to make it into the final sprint, Peter Sagan was no where to be seen in the finish, even though his team Bora-Hansgrohe led the pace to split the peloton about 70 km before the finish.

With a max speed of 70.4km/h in the sprint, Jumbo Vismo Team’s Van Aert is the first Belgian rider with multiple Stage wins in a single edition of the Tour since Tom Boonen in 2007.

“I’m really proud of this one,” said Van Aert. “We rode flat out straight from the gun. It

was an impressive ride from Bora-Hansgrohe from the first KOM. They made sure all sprinters got dropped. Everyone could feel the crosswinds during the race. I put all my energy in protecting Primoz [Roglic]. We had a good day at the front while some GC favourites lost time. It was an incredible finish.”

Though he was focused on protecting teammate Roglic Primoz, he said “it would have been a shame to not try to win the stage as well in a smaller bunch sprint. I found a gap on right hand side and I timed my sprint perfectly.”

Thomas DeGendt broke from the front of the peloton at the Col de Peyronnenc, with more than 85 km to go, and held a gap of about 35 seconds as he passed the summit of the cote de Paule, and 50 seconds with 45 km to go. He got reeled in by the front peloton at 35 km to go as Team Ineos-Grenadier put the hammer down.

As Daniel Oss of the Ineos Team pushed the pace, the front bunch split into three, and winnowed down the front group to 40 riders as they pushed into the cross winds of Lavaur.  Among them was Yates, Pinto, Alaphilippe, Bardet, Martin, Quintana, Barguil, Lopez, Chaves, Higuita, as well as sprinters Peter Sagan, Edvald Boasson Hagen, Wout van Aert, Bryan Coquard, Hugo Hofstetter and Clément Venturini who were candidates for a sprint victory.

This left behind Pogacar and Landa with an increasing gap of 40 seconds, and Richie Porte in the third group.