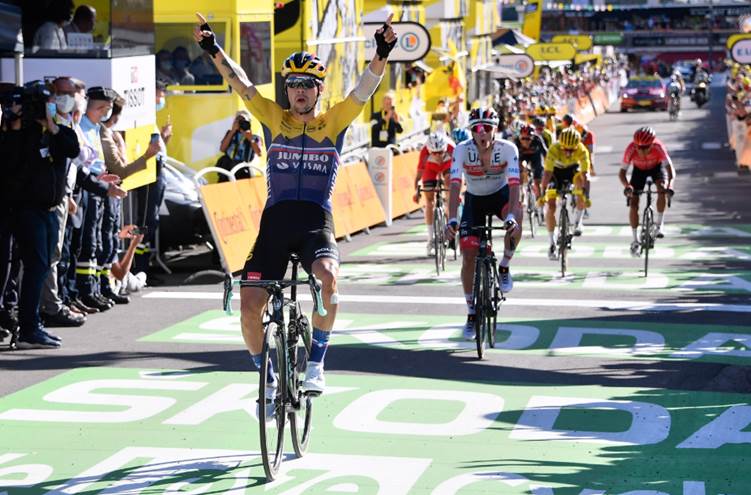 Slovenian champion Primoz Roglic took his third Tour de France stage win in Orcières-Merlette. His previous wins were at Serre-Chevalier in 2017 and Laruns in 2018.

Frenchman Guillaume Martin rounded out the podium while his fellow Frenchman Julian Alaphilippe, fifth on the line, retained the yellow jersey.

It was a triumphant stage win for Roglic whose Tour de France was in doubt after his crash at the Critérium du Dauphiné.

Said Alaphilippe after the stage, “I had the double goal to retain the yellow jersey and to win the stage. It would have been special to win a second stage. I have no regret because the team perfectly executed the plan, I gave it all and I’ve been beaten by stronger than me.”

admission that gives your competition more fuel to challenge you. ” I’m happy with my shape even though it’s hard to compare with last year,” he continued. “We won’t be able to keep that rhythm for three weeks. Soon it won’t be up to us to control the race.”

Wow, really? Nothing like handing the keys to the castle to your competitors.

Peter Sagan who is in the lead for the Green (Sprinter’s) Jersey, expressed disappointment with his performance, even though he has the most points. “Today it was so-so for me,” he said.  “It’s been a hard stage, …I did my sprint, took some points… Will see tomorrow what can I do. I’ve seen the finale and it is okay for me. We’ll see.” 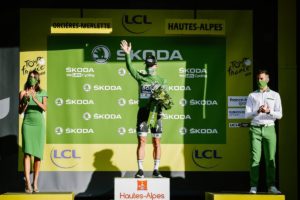 Vuillermoz, the highest ranked of the breakaway riders 3’53’’ down on Alaphilippe, became the virtual Maillot Jaune at km 18 when the maximum time difference of four minutes was recorded. Behind them, Deceuninck-Quick Step sent Rémi Cavagna and Tim Declercq to set the pace at the head of the peloton to assure they could not win the stage.

Benoot crashed in a spectacular way but with no consequences except bicycle was trashed in a downhill with 24 km to go. Politt sat up and Burgaudeau got dropped, so Vuillermoz, Neilands and Pacher approached the last 20 km in the lead with an advantage of 1’30’’ over the peloton.

Neilands went solo in the côte de St-Léger-les-Mélèzes with 19.5km to go. The Latvian had 35’’ lead with 10km left in the race. He got reeled in with 7.5 km to go at the bottom of the final ascent to Orcières-Merlette. Pierre Rolland (B&B Hotels-Vital Concept) was first to attack with 4.5 km to go. The Frenchman rode solo for 600 meters before getting caught.

Jumbo-Visma set a high pace up the hill, mostly with Wout van Aert putting the hammer down. The Belgian rouleur was phenomenal in preparing the terrain for Sepp Kuss to finish the job for Roglic. Pogacar crossed the line in second place while Martin who had tried to anticipate the sprint closed in third place. Fifth to the line, Alaphilippe remains in the lead of the overall ranking after stage 4.