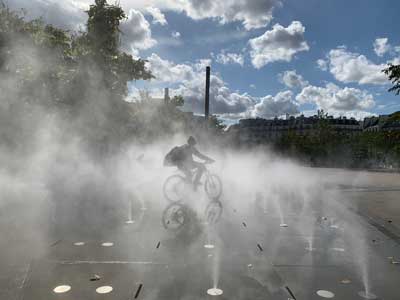 Back in Paris, with little cycling to do (for myself), but there is still much to report.

Cycling lanes have become bigger and more official. Since last year, the one lane that was dedicated to cycling on the West Bank of the Seine has now become two lanes in both directions. 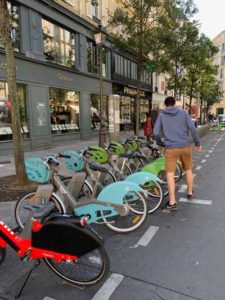 There are cyclists of all types and abilities and speeds, and there seem to be relatively few accidents. Now there is the Velib in many colors, not just gray as before, and there are competing companies as well that have bikes were you can leave it anywhere. The next person simply finds it by checking their phone (see bright orange bike left–that one is actually an electric bike–still illegal in NYC, and frankly not much used here.)

Tell the truth it’s clear people here cycle to stay in shape, and get around easily and without the hassle of hailing a cab, getting stuck in traffic, or going down into the metro and waiting for a train.

The Velib is ridiculously easy to use, and rarely costs more than $3 a ride, unless you use it all day.

Then, there are also stand up scooters, sometimes ridden by two lovers standing together, which appears incredibly dangerous, but somehow those I see, manage not to fall. The scooters are left “wherever,” literally by the user, on the sidewalk, in the middle of the sidewalk, on the street, leaning against a wall, alone, abandoned, when they no longer have any use for it.

They have become the new street garbage and I am sure the Mairie of Paris is none too pleased. But maybe not–there seems to be a lot of tolerance for non-motorized transport here, and there are few rules. People are expected to behave properly, c’est tout! 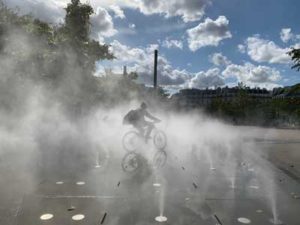 That said, I did see their representatives rounding up the scooters at night after 10 PM. One such “mec” which means “guy” simply, was riding 4 scooters at once to the truck. 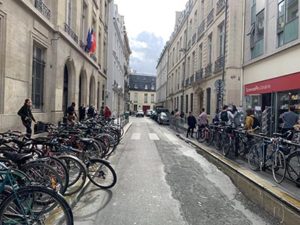 Bicycles are a big means of transport for the young, as evidenced by the number of bikes parked outside a Lycee (high school).

It’s also the transport of choice for those doing “business”–such as drug dealers at Les Halles (see pic of rider going through the wonderful water spray that comes up periodically in the square.)

And although it is not considered good manners to ride on the sidewalk, on occasion, there are 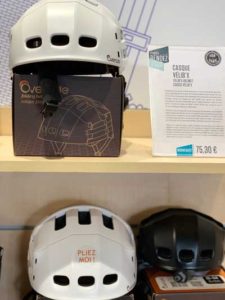 those who do. Riding in the middle of Les Halles is not illegal: however, riding down the Jardin des Tuileries outside the Louvre is, just as is walking your dog.

If you are renting a Velib it’s not a bad idea to buy a foldable helmet, easily purchased at the main tourist center at the Hotel del Ville.

It costs close to $85–a steal for an unbroken head. Still not many use helmets while riding across town. There are many pretty young things riding along with their hair in the breeze and no helmet to crush their locks.  Young men on racing bikes however, are more likely to use helmets. 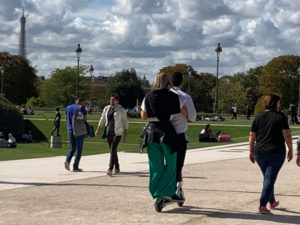 Cyclists can use the pedestrian crossings and should–when crossing from one street to another. It is expected and safer than trying to move with car traffic.

But the most important thing about riding a bike in Paris or anywhere in France (except highways and roads where there is no space) is that drivers of motor vehicles and pedestrians respect you.

The famous saying, that the grass is always greener on the other side, but in  the case of cyclists in a big city, the grass is definitely greener in Paris than in New York City.