The opening of the Tour de France today was remarkable in so many ways.

Starting and ending in Nice, France, one of the most symbolic cities bordering the Mediterranean, the day brought rain and multiple crashes, and ended in a surprise victory for Norwegian sprinter and UAE Emirates rider Alexander Kristoff who bested Mads Pedersen (Trek-Segafredo) and Cees Bol (Team Sunweb) –as well as Peter Sagan to the line in a spring finish.

It was an ebullient fourth Tour de France stage win, but the first Yellow Jersey for the 33-year-old who is known to be a tough guy who trains in the snow and ice in his home country of Norway. He is the second Norwegian to take the Yellow Jersey after Thor Husvold.

The Tour is being held almost two months after the normal start time of July 1, and the change in weather had a substantial impact on the first day of racing with multiple crashes on wet roads by top sprinter Sam Bennett, then his teammate Julian Alaphilippe, who wore the Yellow Jersey for most of the 2019 Tour before losing it t the final winner, Colombian Egan Bernal; then Russian Pavel Sivakov of team Ineos Grenadier crashed further in the stage. Remarkably the entire peloton decided to slow down to avoid further crashes, but yet again another rider, Colombian Angel Lopez lost control and hit a traffic sign.

It was a disappointing day for Michael Schar (CCC), Cyril Gautier (B&B Hotels-Vital Concept) and Fabian Grellier (Total Direct Energie) who broke away at the beginning of the stage. Grellie was the first to get caught, while Schar and Gautier were caught at the 98 km mark. 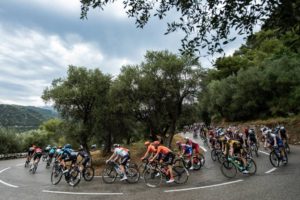 to go, but got reeled in at 13 km to the finish, and Thibaut Pinto (Groupama FDJ) was caught in a crash with 3 km to go along the Promenade des Anglais in Nice. 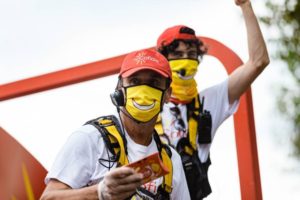 But it wasn’t just the weather and the crashes–a harbinger of things to come as this Tour for the first time in history is being held at the time of year when it rains more and is colder–that made today stand out.

For one, where fans used to pack the sides of the roads, there were sparser crowds. And unlike their American counterparts who attend political conventions, bars and other events without face coverings, these fans were all were face masks. Though the riders didn’t wear masks while competing on the road, as soon as they finished their stage, on the masks went.

The masks matched the team colors, and the winner’s jerseys, with a Yellow winners mask for the new Yellow Jersey stage winner, Kristoff, but also Green for the Green Jersey winner (also Kristoff), polka dot for the best climber of the stage, and white for the best young rider–in this case Mads Pedersen (Trek-Segafredo). Even the award presenters, this time narrowed down to one gorgeous woman instead of two or three, and an official, also wore matching masks. As did all the personnel in the pre-finish caravan–a real contrast with the United States and its federal and state loose mask wearing policies.

It is clear that in addition to the wetter and colder weather conditions at this year’s Tour, the health and condition of the riders, and luck, there is another factor that will enter the race this year, and that’s the specter of Covid-19 spread. If two members of the same team are tested positive in seven days, the entire team will be removed from the Tour. That’s in addition to the possibility that individual riders could fall ill during the Tour.

The safety and health protocols for the Tour were developed between cycling governing bodies and the French authorities prior to the Tour to help prevent the spread of the Coronavirus.

As a results the number of journalists and other accredited team members was reduced by 30% compared to 2019. Each attending member including riders, had to present a negative Covid-19 test prior to obtaining a pass.

“A bubble has been created around 650 people, comprising riders, staff members of cycling teams and race officials, all subject to two tests prior to the start and one per week of racing,” writes the Amaury Sports Organization, a private group that sponsors the Tour every year. “It’s compulsory to wear a mask all along the route of the Tour de France. Access to the climbs will be filtered,” they continued. The organizers are supplying 700.000 masks over the course of the Tour, half of them being for the crowd, as well as two tons of sanitizer. A 20-person medical Covid-19 division of the organization is following the Tour with a mobile laboratory able to run Covid-19 tests whenever they’re needed.

The pandemic also affected the journalists attending the event, with Americans barred from traveling, and some noticeably absent from the NBC coverage, their slots filled in by Europeans with traveling rights.

There is one thing we can predict for sure: this will be one of the most unusual Tours ever, with surprises every week, and no doubt, a surprise final winner in Paris 23 days from now.