Van Garderen, who picked up two Grand Tour stage wins in 2017 at the Giro d’Italia and the Vuelta a España (Time Trial stage), made up that minute and more on the 21.6-mile loop, causing the Amgen Race Leader Jersey to change hands for the third time since the race began on Sunday and extending his lead 23 seconds over Bernal, now second in the overall standings.

Van Garderen was visibly emotional when he realized that he had taken the Yellow Jersey from Bernal, a minute or so before Bernal finished his run. He held his five-year-old daughter in his lap, appearing on the verge of tears.

Though Bernal slipped into second position overall and had to slip off the yellow, he can’t be unhappy because he holds the Green sprinters’ jersey, the Polka Dot King of the Mountain jersey, and the Tag Heuer Best Young Rider (white) jersey.

The second placed rider in today’s individual time trial was van Garderen’s BMC teammate, New Zealander, Patrick Bevin who had hoped to win the ITT. But van Garderen’s drive to steal away the yellow was greater than Bevin’s ability to win the race. It must have been a bitter pill for Bevin to swallow. One can only imagine the dynamics in the team hotel tonight.

Van Garderen was over the top. “It feels incredible. It’s been five years since I’ve been back 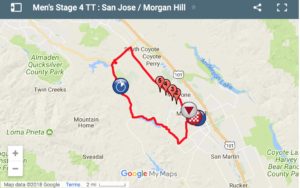 to the (Amgen) Tour of California. It was my first major GC victory as a professional, so obviously, I have great memories.”

Van Garderen recalled the last time he came to ATOC he was a new father, and today he was able to bring back his little girls on stage.  “It’s an incredible feeling and an incredible experience, and I’m definitely going to savor it.”

“One and two is a good ride for any team,” said Bevin after the race. “It’s nice to have Tejay in the jersey with what’s ahead, and we’ll work to keep that overall lead.”

Third place finisher, Tao Geoghegan Hart of Team Sky said, “I’m happy with my ride. I had no idea how I’d do going into this.”

In the final three race days this week, BMC Racing Team will have to fend off challengers to the yellow jersey, which van Garderen would surely like to keep: “We have a really strong team, and the motivation’s going to be high and if you’re going to want to beat me, you’re going to have to go to the bitter end.”

Stage 4 presented by TAG Heuer in San Jose / Morgan Hill featured cyclists racing the clock one by one on a looped course that featured one moderate climb. The gusty day blew apart the leader board with other shakeups including BORA-hansgrohe’s Rafal Majka (POL) dropping from 2nd to 6th place in the overall (+1.29”) and Mitchelton-SCOTT’s Adam Yates (GBR) sliding from 3rd to 5th (+1.07”). Team EF Education First-Drapac p/b Cannondale’s Daniel Martinez (COL) rose from 6th to 3rd (+.37”) and Bernal’s teammate Tao Geoghegan Hart (GBR) climbed from 11th to 4th (+.52”).