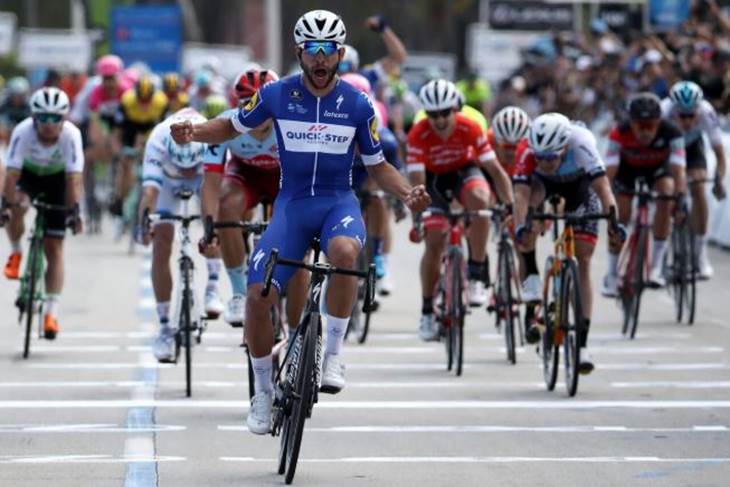 By Jim Freibert, Reporting from California.

The lowdown: If the average spectator at the finish line of today’s AMGEN Tour of California looks at the results in tonight, or tomorrow’s news, they may ask, “What the heck!?!”

What they saw was a VERY CLOSE, FAST, mass sprint.  Not quite a photo finish, but really close, and one’s opinion of the results could have varied by your view, the angle you had (or your favorites), as there were NO time gaps until 112 riders had gone over the finish line!  It was a very close finish among the top 12-14 riders, and all of them have fans, and are recognized for their wins.

From the top, Quick-Step Floors had repeatedly massed near the front of the race, no surprise Fernando Gaviria was first, his teammate Maximiliano Richeze, two blinks of an eye later was 17th, in between them read like a WHO’S WHO of the World’s best sprinters!

Caleb Ewan of Australia was second, Peter Sagan, third.  Marcel Kittel was fourth and Alexander Kristoff was fifth.  The fastest guy out of the gate, Mark Cavendish was 10th, and the best sprinters from Belgium, America, Portugal, New Zealand, Poland, and the Netherlands filled in the top 20.

Because of the time bonuses awarded at the finish, and those collected during the race by the two guys who were two minutes in front of the race, for about 125 of 133.5 kilometers, in American English 77 of the 83 miles, the breakaway’s Tanner Putt (UHC-UnitedHealthcare) and Belorus’ two-time National champion, Andrei

The race winner, Gaviria got a 10 second bonus for crossing the finish line inches ahead of Ewan and Sagan, but Sagan’s behind Putt, and even with the other breakaway rider.  Don’t worry, this will all be separated as they race up the mountain tomorrow!