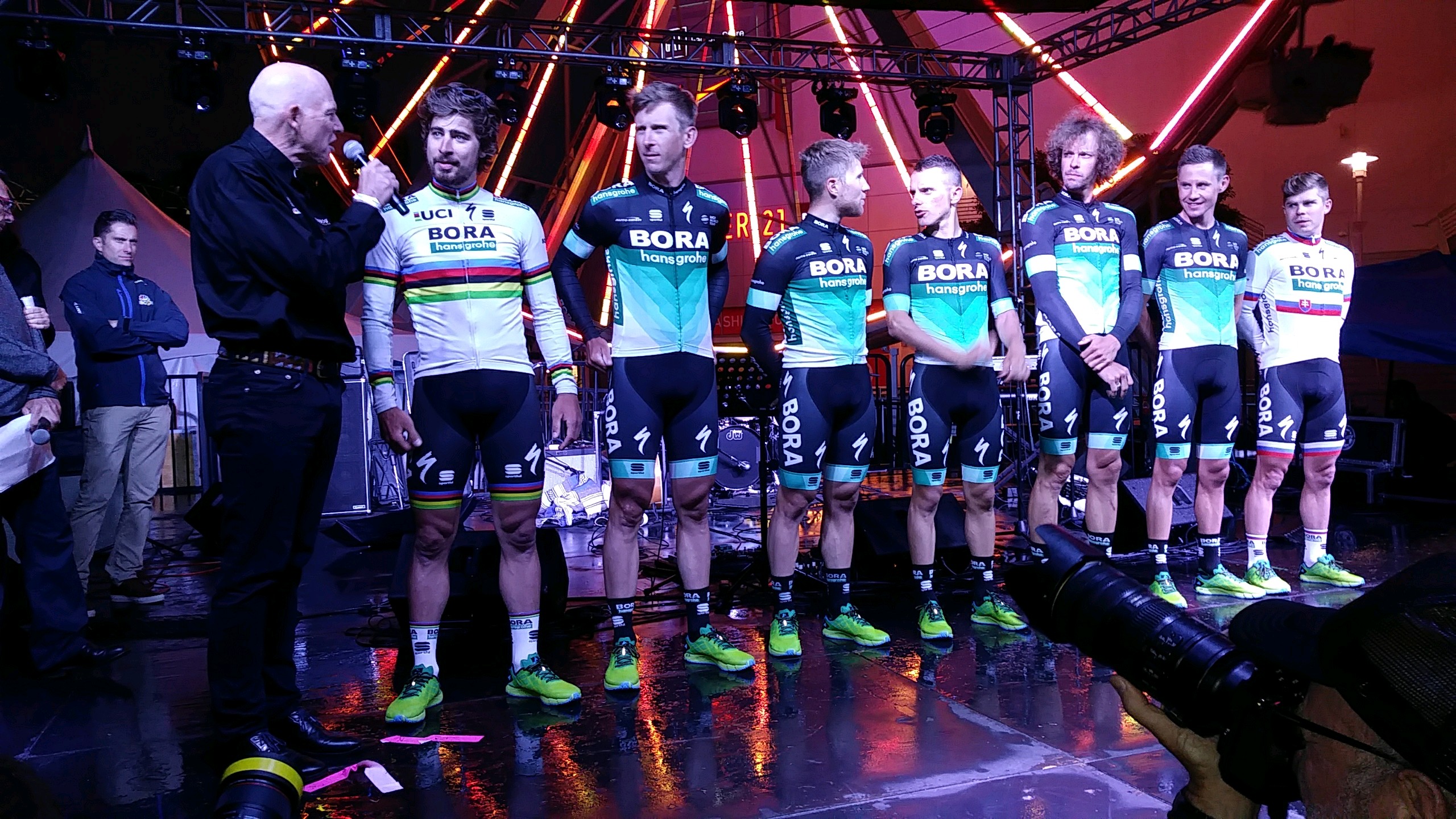 Presenting the Stars and Teams at the Amgen Tour of California

(Long Beach, CA) The World’s most famous, most popular, and winningest

cycling star has spent ten days in the Golden State getting ready for one of his most important races.

The King of California, Peter Sagan has had a lot to do and think about over the last two weeks.  Sagan’s multi-million dollar secondary sponsor Specialized is based in Northern California.

He and his BORA-hansgrohe teammates were training at altitude, and hosted a Gran Fondo and soiree in Truckee last weekend, and it was no surprise that they saved “the best for last” at Friday night’s Team Presentations for the AMGEN Tour.  The vocal crowd had stood in the rain for hours before Bob Roll started interviewing Peter, and the other former World Champion on the team, Poland’s Rafal Majka.  Sagan won the overall by three seconds in 2015, and he’s the “King” because he’s won a record 16 stages in California.

Sagan has been very coy about answering questions for the last month.  He was heavily criticized by four time Paris-Roubaix winner, Tom Boonen, then Sagan won Paris-Roubaix on April 8th.

This week reporters have tried to bait him into revealing a strategy, or predicting wins – no comment from Sagan.  One-word answers from Sagan; seems he decided about a couple months ago to let his legs do the talking.

But those legs have shouted a lot. Since March of 2010 Sagan has won more than 100 pro races, including an unprecedented three, back-to-back, World Road Racing Pro Championships.  But the BORA-hansgrohe racer who is their best shot at winning the overall, GC, General Classification — Majka was a mere 35 seconds short in 2017.

We’ll save Peter’s biggest sprint rival, and “pissed off “Mark Cavendish for last, and review the second tier teams from America’s tour, the Pro Continental invitees.

Team Sky may have still been jet lagged, as only four of the seven Team Sky

Team Sunweb-GIANT did a ride with fans from the hotel on Thursday morning, and they were as cold as any of the guys who came on stage wearing short, short-sleeved jerseys, and no warm-ups while most of the people watching the Team Presentation were bundled up from head to toe, in coats, hats, and some under umbrellas.  So their time on stage was so short: two German’s had exited stage left, Niklas Arndt and Johannes Fröhlinger before we snapped this photo, just catching Jai Hindley (AUS), Lennard Kämna (GER), tall Tom Stamsnijder (NED), Mike Teunissen, and Maximilian Richard Walscheid (GER).

Mitchelton-Scott : Both Bob Roll and Christian Vande Velde wanted a shot at interviewing the Aussies, rolling through intros, the team had just won a Giro stage and but one of their twins, Simon Yates in the Leader’s Pink jersey, the Maglia Rosa in Italy!  So we’ll come back to Adam Yates (AUS), Jack Bauer (NZL), Caleb Ewan (AUS), Mathew Hayman (AUS), Michael Hepburn (AUS? or GER!), Roger Kluge (GER), and Luka Mezgec (SLO).

Before going further, after listing more than a dozen of the World’s fastest Road sprinters – it’s time to share my theory that AMGEN Tour of California fans are likely to see the SPRINTER’S DRESS REHEARSAL for the 2018 Tour de France!

With a few exceptions, most of cycling fastest sprinters were in Long Beach today – not ITALY!  So everyone applauded a GC contender Adam Yates, but asked more questions of the pocket-rocket Caleb Ewan – who may be the only guy that Cav can’t draft off of in a sprint – Ewan sprints like he’s going to rub his nose on his front wheel!

AG2R Mondiale; Bob Roll was excited about interviewing the National

Champion of Belgium, Oliver Naesen as soon as he got on stage, and he and other announcers barely mentioned Benoit Cosnefroy (FRA), before jumping to the Swiss National Champion, Silvan Diller who was as close as anyone to winning the 2018 Paris-Roubaix (except he was beaten by Peter Sagan!). Mathias Frank (SUI) has raced here in California before, an asset, and Ben Gastauer (LUX), Cyril Gautier (FRA), and superstar Stijn Vandenbergh (BEL) rounded out a very strong AGR2 team.

Team Lotto – Jumbo NL : Two Lotto Jumbo racers have Tour of California titles, and they’re both racing the Giro d’Italia right now, Robert Gesink (NED) who won in 2012, then George Bennett (NZL) who won in 2017.  Their team may start with only six racers, but one was the Best Young Rider last year, America’s Neilson Powless.  Backing him are Floris de Tier (BEL), Sepp Kuss (USA), Thomas Leezer (NED) who has raced here many times before, another Hollander, Antwan Tolhoek, and veteran Maarten Wynants (BEL).

TREK-Segafredo: We covered the TREK-Segafredo team in our first preview of the Tour of California, but fellow Midwesterner NBC commentator Christian Vande Velde couldn’t help but try to get a couple more answers from Stetina.  They’re both third generation cyclists, who raced for GARMIN (now EF), and family friends (their fathers were US Olympic cyclists together).

Just three left with some of the best stories, but we already covered Peter Sagan’s BORA-hansgrohe… And you may have caught a side story about the COOLest and quietest team cars at the race – the EF-Education First – drapac – cannondale Electric HOT PINK TESLA cars!

As Phil Liggett joked “We LOVE teams with jerseys like these!” The day-glow, neon-green Citadel guys heard that about their Hincapie jerseys, then the particularly bright, neon pink (orange for training!) EF guys, standing next to the towering Taylor Phinney (USA) who just finished a credible 8th at the Paris-Roubaix last month, is recovering to show the talent he demonstrated as a Junior World Champion in two events!

Another son of Olympians (dad Davis Phinney still has the record for the most American races won, and won stages in the Tour de France, and his Mom, Connie Carpenter-Phinney won the first gold medal at the 1984 LA Olympic Games).  But let’s hit the team and call it a day!

Fourteen down, three to go!  Team Katusha-Alpecin got the strangest question from the audience, of course it came from someone that Jens Voigt found, who asked, “Who does your laundry!?” LOL, Kittel pointed to Nathan Haas (AUS), without missing a beat, then said, “I really don’t know, someone I hope,” seriously it won’t be washed in Alpecin shampoo – that’s for Marcel’s Wunderhair!  Teammates, Ian Boswell (Bend, OR), Matteo Fabbro (ITL), Reto Hollenstein (SUI), Nils Politt (GER), and a kid who knows about sprinting Rick Zabel (GER), whose father won the Tour de France green Sprinter’s jersey SIX TIMES!