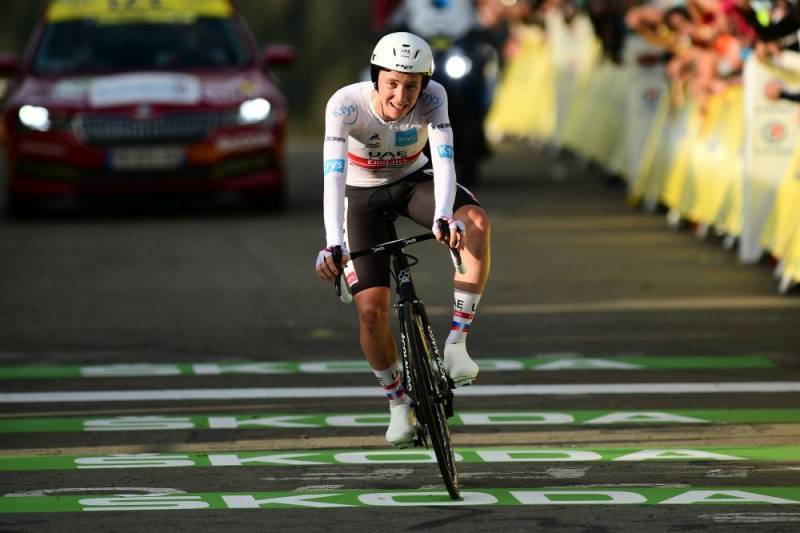 Tadej Pogacar (UAE Team Emirates) rode to Tour de France overall victory as he smashed all his rivals in the individual time trial to La Planche des belles filles, also besting Primoz Roglic (Jumbo-Visma) who was predicted to be the eventual winner of the 107th edition.

“I was happy with the second place and now I’m here with the yellow jersey,” said Pogacar. “I don’t know what to say, it’s unbelievable. I’m really proud of the team. They did such a big effort over three weeks. I feel sorry for Primoz Roglic. He had done a very good Tour de France so far, he was superior during the whole Tour de France, his team did an amazing job and he had a bad day today.”

Tom Dumoulin (Jumbo-Visma) and Richie Porte (Trek-Segafredo) rounded out the stage podium, meaning a move to the final podium as well for the latter.

First of the 146 riders to start stage 20, a 36.2km individual time trial from Lure to La Planche des belles filles, German Roger Kluge was the first of three Lotto-Soudal riders who made the bottom of the overall classification after the Alps, followed on the road by Frederik Frison and Caleb Ewan. Soon after them, Maxime Chevalier (B&B Hotels-Vital Concept), the youngest rider of the 107th Tour de France set a provisional best time until Nils Politt (Israel Start-Up Nation) dethroned him briefly before Rémi Cavagna (Deceuninck-Quick Step) became the first rider to clock in less than one hour: 57’54’’. David De La Cruz (UAE Team Emirates) set a second best time and a provisional best time up the hill before the KOM contenders went in action.
Tom Dumoulin an Almost Win Before Pogacar Arrives
Cavagna remained in the lead when the top riders entered in action. Local rider Thibaut Pinot (Groupama-FDJ) set a provisional sixth best time that pleased the enormous crowd. After two hours and 53 minutes on the hot seat, Cavagna was ousted by Wout van Aert (Jumbo-Visma).
In the fight for GC positions, Damiano Caruso (Bahrain-McLaren) quickly appeared much superior to Alejandro Valverde (Movistar), his rival for the tenth place. Dumoulin was next on the hot seat after Van Aert while Richie Porte (Trek-Segafredo) was on his way to overtake Miguel Angel Lopez (Astana) overall.
Roglic Struggles
The main fight for the yellow jersey between the two Slovenians turned to the advantage of Pogacar who already outclassed Roglic after the first 14 km on the flat terrain. The youngest of the two showed he was faster at all time checks and became the virtual leader of the Tour de France at half way into the ascent to La Planche des belles filles.
Roglic seemed to have hesitated before changing his bike after the beginning of the climb. But he lost almost two minutes, being now 59’’ down on Pogacar on the eve of the grand finale in Paris. Pogacar is set to become the youngest winner of the Tour de France since the inception of the yellow jersey.