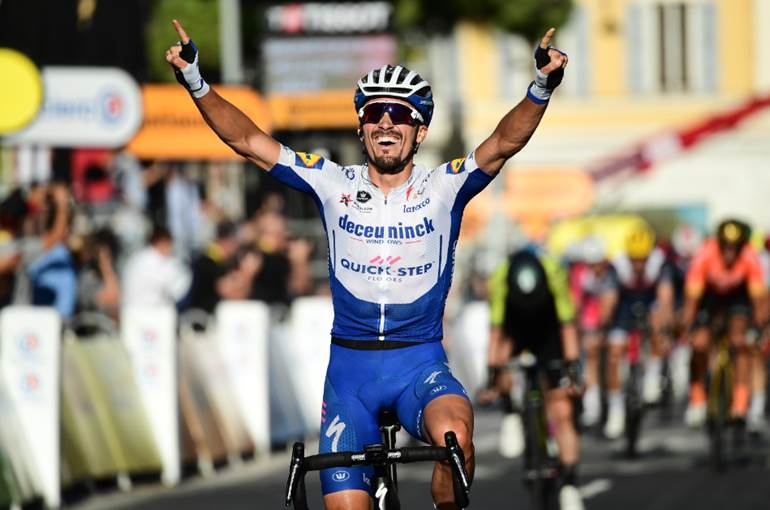 Back in Yellow again, Julian Alaphilippe (Deceuninck-Quick Step) took his fifth Tour de France stage victory in Nice after he launched a strong attack and broke from the lead pack in the in the last climb of the day.  As he passed the finishing line, he raised his finger to the sky, a tribute to his father who died this June.

At the start of this stage with 173 riders started stage 2 in Nice with Philippe Gilbert (Lotto-Soudal) and Rafael Valls (Bahrain-McLaren) out of the Tour due to a fractured kneecap and femur respectively. The day was warm and sunny, good racing conditions compared to the first day of the Tour which brought rain and many crashes.

Attacks started after the flag off. It put Peter Sagan and Lukas 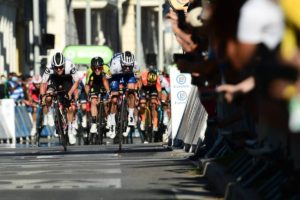 Frenchman, Cosnefroy attacked 1.2 km before the top of La Colmiane. He reached the summit alone and formed a leading four-person group with Perez, Gogl and Asgreen in the downhill. As the front group of seven reunited, Jumbo-Visma took over from UAE Team Emirates at the front of the peloton. The team also set the pace again in the ascent to col de Turini where the time difference went up to 3’30’’. Sagan lost contact with the breakaway group up the hill. Perez outsprinted Cosnefroy at the top while the peloton was timed with a deficit of 2’20’’. Yellow jersey holder Alexander Kristoff was no longer part of the pack, neither was runner up, world champion and white jersey holder Mads Pedersen.

The six leading riders got reeled in at the beginning of the ascent to col d’Eze with 40km to go. Nicolas Roche (Team Sunweb) passed first at the top. Critérium du Dauphiné winner Dani Martinez (EF) crashed in the downhill but made it back to the pack on the finishing line with one lap with 7.5 km to go.

Then Alaphilippe attacked on the ascent with 13 km to go. Hirschi (Team Sunweb) went across to him while Tom Dumoulin (Jumbo-Visma) crashed after touching the back wheel of Michal Kwiatkowski (Ineos). Adam Yates (Mitchelton-Scott) counter-attacked and joined Alaphilippe and Hirschi at the front.

Yates took the 8 seconds bonus at the top, before Alaphilippe and Hirschi with an advantage of 20 seconds over the peloton. They kept the same gap until the red flame of the last kilometer. With the lead peloton about to overtake them, Alaphilippe outsprinted Hirschi while Yates crossed the line in third place. Greg Van Avermaet (CCC) and Sergio Higuita (EF) took the first two places of the peloton.