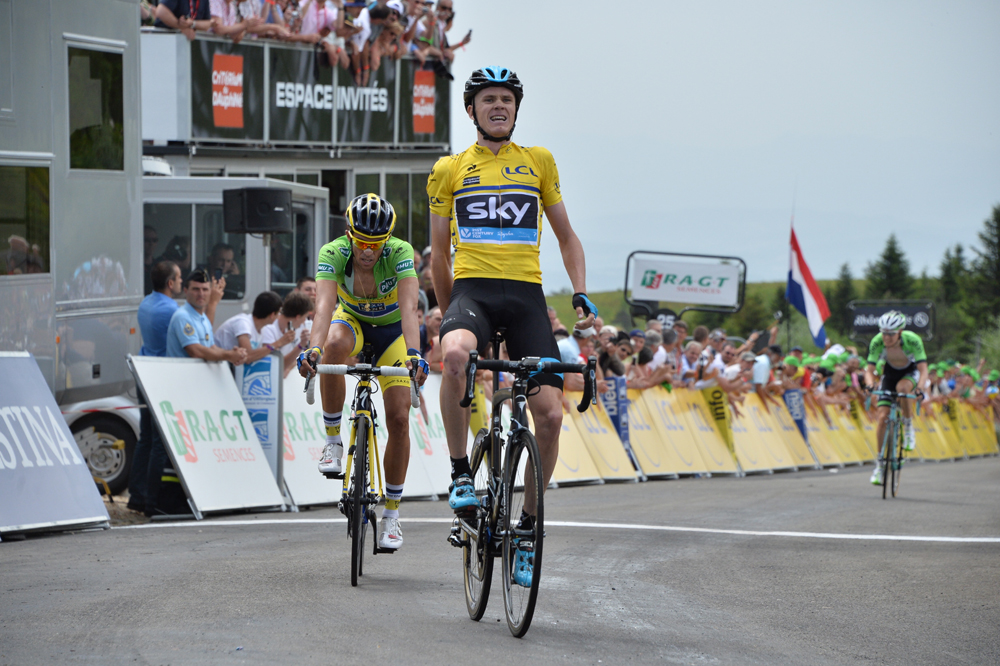 After yesterday’s time trial, where Kenyan Chris Froome won 8 seconds against Alberto Contador, he continued to play out his first real one-on-one this year with the Spaniard as he out-sprinted him on the col de Béal to a spectacular finish.

Now the Team Sky leader is 12 seconds ahead of his Tinkoff-Saxo rival.

All five formed a gruppo for most of the stage.

But Team Sky was determined to stay ahead at the the col de Béal, so the break group never took more than a  a 5 minute advantage.

Not only did Reza take the maximum of points for the King of the Mountains competition in the first of the six categorized climbs of the day, the Frenchman also won the five-man sprint at the top of the four following climbs, scoring the polka dot jersey from Vincenzo Nibali.

De Marchi tried to repeat his exploit from last year when he won the last stage of the Dauphiné in Risoul but he was eventually reeled in with 7 km to go as there was nothing to do against Team Sky plowing ahead at the front of the peloton.

Froome initiated an end-of-stage battle with two accelerations near the five kilometers-to-go mark, but on both occasions, Alberto Contador was able to keep his pace, so the yellow jersey wearer slowed down and allowed the six-man group ahead to contest the stage.

Froome didn’t let anyone go out ahead despite attempts by Wilco Kelderman (Belkin) and Andrew Talansky (Garmin-Sharp) while Nibali struggled and eventually lost half a minute when Froome put the hammer down for his final stage push.

Contador kept up the pressure on the Kenyan but couldn’t best him. Froome scored his second stage victory in only two days of racing and now has a 12-second lead over his arch rival and 21 seconds over the new best young rider Kelderman while Nibali stands in sixth position overall at 50 seconds back.