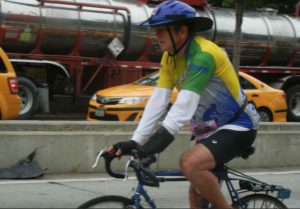 Local cyclist Phil O’Reilly was killed as he was crossing a major street in Queens, N.Y. on Tuesday.

The crash occurred on Union Turnpike as the Five Borough Bike Club member and ride leader was returning around 11 P.M. to his Queens home from a basketball game at St. John’s University.

The driver, who was traveling westbound, hit O’Reilly. He died from his head wounds sustained in the crash.