June 5, 2014–New Jersey
A plan to add new bicycle and pedestrian paths and access around eight towns around the

Saddle River County Park will be the subject of a public meeting tonight.
Held at the Rochelle Park Senior Center, from 4 to 7 PM, the meeting will allow public comment and input.
“This plan would provide safe bike and ped connections to the parks and the path, enabling those who normally drive their cars to the park with their bikes on racks, to safely pedal there,” said Cyndi Steiner, Executive Director of the New Jersey Bike Walk Coalition.
Among the towns affected would be Maywood, Ridgewood, Glen Rock, Fair Lawn, Elmwood Park, Saddle Brook, Paramus, and Rochelle Park.

“The plans will identify s

afety and mobility enhancements that can encourage more walking and bicycling in these eight communities,” and will guide the County’s efforts to create Complete Streets and identify priority roads and links for improving/enhancing bicycle and pedestrian infrastructure, according to the plan’s website.
Steiner said the plan would translate “into fewer cars in the parks and on the streets around the parks.”

Once inside the Saddle River County Park, there is a 6-mile, paved mixed use path that stretches the length of the park, and borders the Saddle River.
But getting to the park requires the use of a car, which is antithetical to the park’s purpose and use.
Bergen County, CentralBergenBikeWalk.com, Complete Streets, Cyndi Steiner, Elmwood Park, Fair Lawn, Glen Rock, Meeting, New Jersey Bike Walk Coalition, NJBWC, Paramus, Ridgewood, Rochelle Park, Saddle Brook, Saddle River County Park 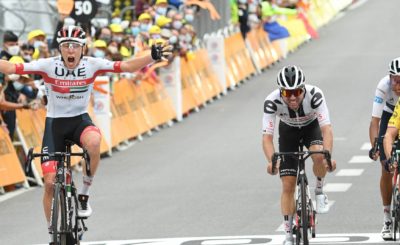 Another 1-2 for Slovenia in Mountainous Stage 9 to Laruns