This would never–and has never–happened in the United States.

At Europe’s largest gathering of bicycle businesses yesterday, German Chancellor Angela Merkel delivered the opening address that highlighted the important role of bicycles in the transportation system and as an economic driver, reported Bicycle Retailer.

Addressing an audience of media and industry leaders at Eurobike, the leader of Germany spoke of the bicycle as a mobility solution on par with automobiles. “ The bicycle combines what is pleasurable and useful. It is friendly to the environment and promotes health,” she said.

Merkel also said that 70 million people in Germany ride a bike, noting that Germany is both an auto nation an a bicycle nation.

She also touched on the importance of electric bikes, noting they have potential appeal to a wide audience. “It may widen the group of consumers,” she said.

Merkel also addressed the issue of bicycle infrastructure, and said a country should try to create an atmosphere conducive to bicycle growth. Her government earmarked 70 million euros to build bicycle trails and set goals as part of a 2020 bicycle transportation plan. “It is not an either-or choice,” she said of bikes and other forms of transportation. “It is an integration of bicycles with all modes of travel.” 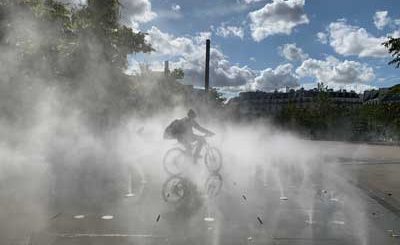